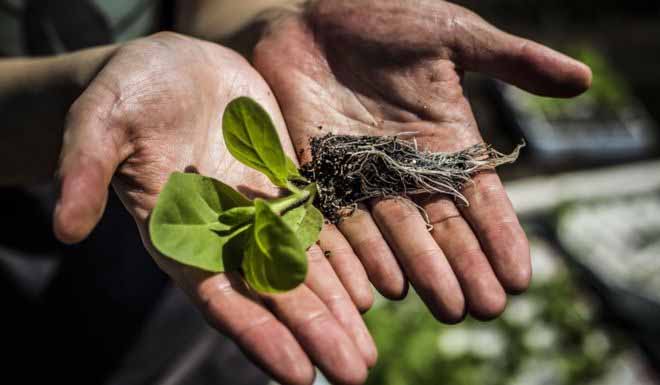 Scientists in the US have engineered tobacco plants that can grow up to 40% larger than normal in field trials.

The researchers say they have found a way of overcoming natural restrictions in the process of photosynthesis that limit crop productivity.

They believe the method could be used to significantly boost yields from important crops including rice and wheat.

The study has been published in the journal Science.

Researchers are growing increasingly concerned about the ability of the world to feed a growing population in a time of serious climate change.

It’s expected that agricultural demand will increase globally by 60-120% by the middle of this century compared to 2005. Increases in crop yields however are rising by less that 2% per annum, so there’s likely to be a significant shortfall by 2050.

While the use of fertilisers, pesticides and mechanisation have boosted yields over the past few decades, their potential for future growth is limited.

Instead, scientists are increasingly looking to improving the process of photosynthesis as a way of increasing food productivity.

While plants use the energy from sunlight to turn carbon dioxide and water into sugars that fuel the plant’s growth, the chemical steps involved produce some toxic compounds that actually limit the potential of the crop.

These toxins are then recycled by the plant in a process called photorespiration – but this costs the plant precious energy that could have been used to increase yield.

In this study, researchers set out to develop a way around the photosynthesis glitch.

“It’s been estimated that in plants like soybeans, rice and fruit and vegetables, it can be a significant drag on yield by as much as 36%. We’ve tried to engineer this shortcut to make them more energy efficient – and in field trials this translated into a 40% increase in plant biomass.”

One important aspect of the problem is that it becomes more prevalent at higher temperatures and under drought conditions.

“Our goal is to build better plants that can take the heat today and in the future, to help equip farmers with the technology they need to feed the world,” said co-author Amanda Cavanagh, a postdoctoral researcher at the University of Illinois.

The researchers chose tobacco plants because they are easy and quick to modify. They also form a fully closed canopy in the field similar to many food crops.

The team is now hoping to use these findings to boost the yields of soybean, rice, potato and tomato plants.

“This process is very similar among all the crops that we are looking to grow,” said Dr South.

“We are are really hoping that this is a technology that provides a tool that further optimises agriculture so that we are not using outside inputs as much and we are growing more food on less land.”

However, the authors recognise that using genetic modification is controversial in many parts of the world.

They argue that a lengthy review process will ensure that if food crops are developed using this technology, they will be accepted by farmers and consumers alike.

“The research that’s necessary to prove that it has low environmental impact and is safe for consumption takes a minimum of ten years and many more dollars in research funds to make sure that this is a good and safe food product,” said Dr South.

The technology is being developed for royalty-free distribution to smallholder farmers in sub-Saharan Africa and in Southeast Asia.

It is being funded by the Bill & Melinda Gates Foundation, the Foundation for Food and Agriculture Research and the UK’s Department for International Development.