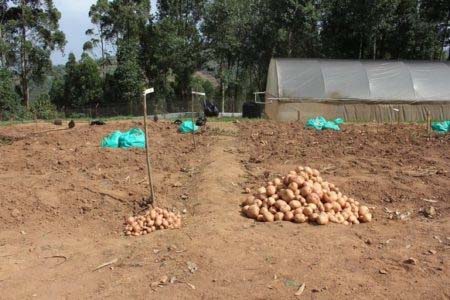 Harvest from a confined field trial in Uganda shows a significantly higher yield (right) for the 3R Victoria potato, and without the use of fungicide. Photo: CIP

Stakeholders working within the potato sector in Uganda are confident about the wide adoption of a new bioengineered late blight resistant potato. Dubbed the “3R Victoria” potato, the yet to be released variety could help over 300,000 smallholder farmers in Uganda achieve higher yields at a lower cost with less exposure to chemicals.

At an expert consultative meeting held in Uganda, stakeholders discussed critical issues that could affect the adoption of 3R Victoria. After long discussion, the group arrived at an estimated 40-50% adoption rate for the new variety 15 years after its release.

Dr. Charles Mugoya, the chairperson of the National Biosafety Committee, explained the variety’s potential benefits and constraints. For instance, using 3R Victoria, farmers will have to spend less money on fungicides. Traders will have to use clear labelling when purchasing and trading the 3R Victoria and they will also have to keep 3R Victoria tubers separated from other tubers. Seed companies selling 3R Victoria seeds will be registered and inspected for maintaining good stewardship, separate production lines, and packaging basic seeds in GMO-labelled bags.

Important factors that could influence the adoption of the 3R Victoria include availability of quality seed, its market value, and market presence among potential buyers. This is according to the workshop participants who represented key actors within the potato sector in Uganda.

“An estimated adoption rate of 40 to 50% represents a strong evidence that farmers in this country want to have access to these late blight resistant potatoes and will benefit from them in multiple ways,” said Dr. Marc Ghislain, Senior Biotechnologist at the International Potato Center (CIP) and cluster leader for CGIAR Research Program on Roots, Tubers and Bananas (RTB) Game-changing traits.

Studies conducted by CIP and  National Agricultural Research Organization (NARO) scientists since 2015  have confirmed 3R Victoria potato to be completely resistant to late blight disease and safe for human consumption and the environment.

For more information on this project download this profile: late blight resistant potato for Africa