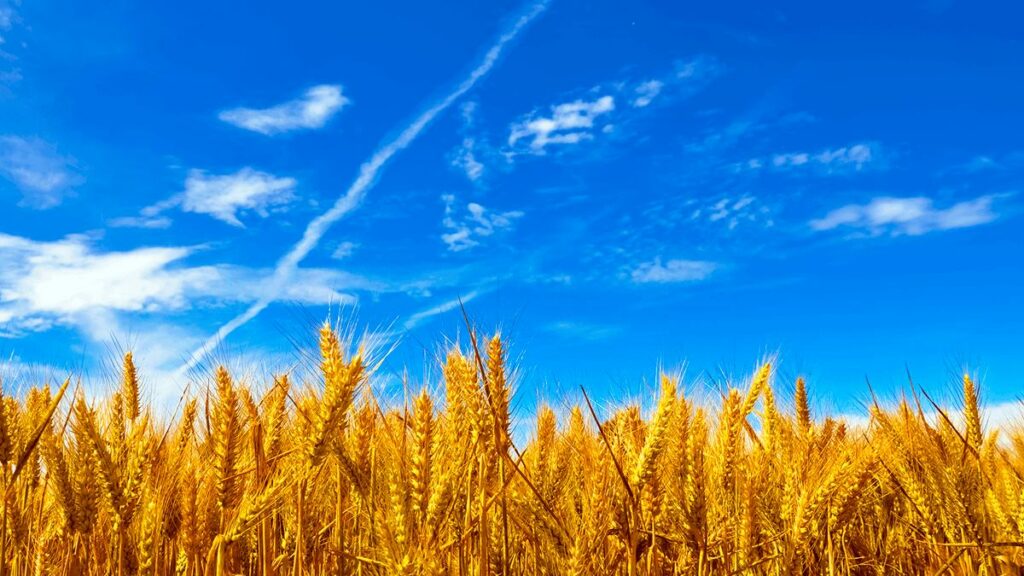 In October 2020, Argentina approved the world’s first genetically engineered wheat for cultivation and consumption. Production expanded dramatically in 2021, and will continue to expand in 2022, after Argentina received regulatory approval in late 2021 for exports to Brazil, a major consumer of Argentina’s wheat.

The lessons from Argentina’s experience are important as other countries decide whether they want to follow suit. Argentina’s genetically engineered, drought-tolerant wheat — named HB4 — could have large environmental benefits, but other countries’ choices will determine their scale.

Argentina is increasingly struggling with drought and saw an opportunity for HB4 wheat to help stabilize production and revenue. Yields have been steadily decreasing since 2017, partially due to drought, with the 2020/21 season yields the second-lowest in ten years. Yields in the 2021/22 season bounced back thanks to sufficient rainfall at critical times. HB4 wheat, genetically engineered to be drought resistant, can help protect against such variability by maintaining high yields even under drought conditions. HB4’s drought resistance gene comes from sunflowers, so it qualifies as transgenic — containing genes from a different species — and therefore as bioengineered, genetically modified, or a GMO.

HB4’s ability to grow better with less water could help reduce land use. As Argentina’s wheat yields have fallen, there has been an expansion in the area planted. This is a pressure faced worldwide: in order to meet the growing global demand for crop products like wheat, there must be an increase in yield and/or the total area cultivated. On a global scale, such farmland expansion leads to deforestation, which releases greenhouse gasses and has negative impacts on biodiversity, as well as ecosystem services like water filtration. Since 2000, 102 million hectares of land — nearly the size of Egypt — globally have been converted from native vegetation to cropland (not including pasture and rangeland). Increasing yields is key to meeting growing food demand without farmland expansion. Without any increase in agricultural productivity, over 1 billion hectares of cropland — greater than the size of China — would need to be cleared globally by 2050 to meet projected demand.

HB4 wheat developer Bioceres says the trait increases yields by up to 20% compared to other similar varieties that are not genetically engineered for drought resistance. A larger-scale set of plantings spread across Argentina in the 2021/22 season provided additional data. Compared to similar wheat varieties without the HB4 trait, HB4 wheat showed an average yield increase of 49% under poor growing conditions, 12% under moderate growing conditions, and a yield decrease of 11% under good growing conditions (the quality of growing conditions may include other factors in addition to drought). The yield decrease under good growing conditions has been addressed, and the improved seed will be phased in during the following seasons. In the meantime, it will be important to strategize planting locations for HB4 wheat based on expected drought conditions. The average yield benefit of HB4 wheat across all conditions in the 2021/22 season was 13%, and though drought was prevalent, sufficient rainfall at critical times reduced the impact of drought on yields. Farmers have been satisfied with HB4 wheat, with satisfaction higher in regions where it increased yields the most.

We estimate that growing drought-tolerant HB4 wheat on one-third of Argentina’s wheat-growing area could reduce global greenhouse gas emissions by at least 0.86 million metric tons of CO2 equivalents per year (MtCO2e/yr) if yields increase 13%, and up to 1.29 MtCO2e/yr if yields increase 20%. These greenhouse gas emissions savings are equal to 34% and 51% of the yearly on-farm emissions from Argentina’s wheat production, respectively (Figure 1). 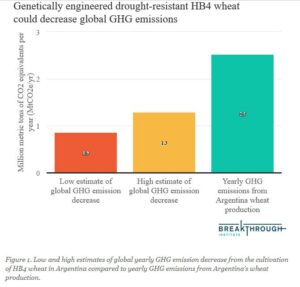 Understanding the potential, in 2020, Argentina approved genetically engineered HB4 wheat for cultivation and consumption, meaning it approved the planting of seeds by farmers for food production. In the 2021/22 wheat season following commercialization, HB4 wheat was planted on 55,000 hectares in Argentina — 0.8% of the total area planted to wheat — with the goal of producing enough seed for a larger-scale planting in 2022. Wheat harvested in the upcoming 2022/23 season will be processed into flour and exported to Brazil.

If more countries allow farmers to grow genetically engineered drought-tolerant HB4 wheat, even more cropland expansion and greenhouse gas emissions can be avoided, while also improving yields and food security. Many other countries are currently in the process of deciding whether or not to import HB4 wheat or grow it domestically. Their decisions matter because wheat is the staple crop for 35% of the world’s population and provides 20% of food calories worldwide, but climate change is threatening its production. The more countries accept HB4 wheat, the more they will adapt their wheat production to a drier climate.

In addition to countries’ decisions about whether to grow HB4 wheat domestically, their decisions about whether to import it also impact the extent of global cultivation, and thereby the food security, climate, and environmental benefits that could come from the wheat. For example, before commercializing HB4 wheat, Argentina waited for import approval from Brazil, which imports about 85% of its wheat from Argentina. Currently, HB4 wheat is being considered for regulatory approval for grain import and cultivation in Brazil, and for import of processed products in Australia. Additionally, the company plans to target the US, Australia, and South Africa for cultivation approval.

The company has also previously said that regulatory processes for HB4 wheat are underway in the US, Uruguay, Paraguay, and Bolivia, and potentially will be in Russia and parts of Asia and Africa. Except for Russia, all of these countries — Australia, Brazil, the US, South Africa, Uruguay, Paraguay, and Bolivia — already cultivate various genetically engineered crops. Argentina makes up 2% of 2020 total world wheat production, and together Argentina, Australia, Brazil, South Africa, and the US make up 10% of total current world production (see Figure 2). With the addition of Uruguay, Paraguay, and Bolivia, together these eight countries make up 11% of world wheat production. China, India, and Russia are the top three wheat-producing countries worldwide (see Figure 2), and while Bioceres may potentially pursue regulatory approval in Russia, neither China nor India has thus far been mentioned as considering cultivating HB4 wheat.

Climate change is threatening crop production through changes in temperature, precipitation, and pest and disease damage, all of which decrease crop yields. In order to maintain yields, technological advances and improvements to production must keep up. For now, the global wheat trade can somewhat balance low production years in some countries. In 2020/21, Argentina had low yields, and other major exporters were split between shortfall and surplus, meaning that global production stayed consistent. But as the impacts of climate change on agriculture increase worldwide, a favorable balance between high and low production globally in a given year becomes less likely. Geopolitical concerns only add to this uncertainty; for example, with the Russian invasion of Ukraine threatening the global wheat supply and increasing wheat prices.

To be sure, genetically-engineered wheat is not the only option for increasing yields, and growth in wheat yields has historically been impressive compared to other crops. However, a greater variety of tools provides flexibility for the challenge of continuing crop yield growth in the face of intensifying climate change. As the speed of climate change increases, faster tools like genetic engineering and genome editing will enable faster adaptation compared to slower tools like conventional breeding.

Import and cultivation approvals by more countries can help HB4 wheat reach its potential to support global wheat production in the face of climate change. This is not only an agricultural issue, but has wide-ranging implications for food security, the environment, and the climate.

Our analysis is based on the 2020/2021 wheat production year in Argentina because this year had the lowest yields of the last five years, due in part to drought. We conducted this analysis using the Searchinger et al. (2018) Carbon Benefits Calculator, with methods described in our preprint on bioRxiv (paper published in Trends in Plant Science), with the following modifications: