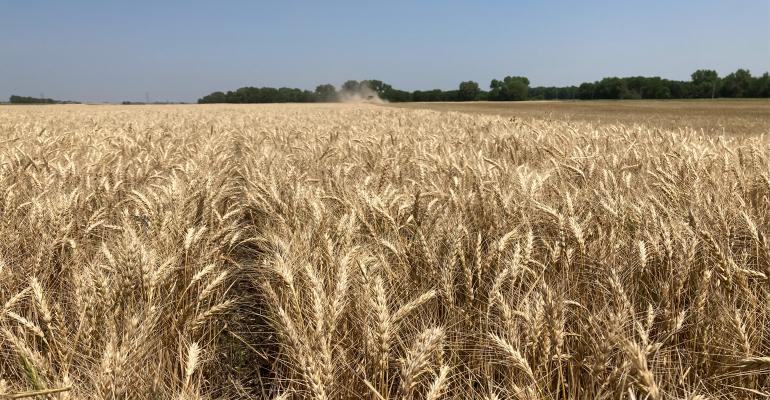 Kansas farmers, like many farmers across the Great Plains and the West, have felt the harsh effects of severe drought through 2022. But in the future, they may have one more tool in the toolbox to battle drought’s effect on their wheat crops.

It’s a wheat trait called HB4, and it offers drought tolerance in wheat, according to its developer, Bioceres Crop Solutions. On June 27, the U.S. Food and Drug Administration concluded its evaluation of the HB4 trait in wheat, and reported it has no further questions regarding the safety of HB4 Wheat, and that it does not raise issues that would require premarket review or approval by FDA.

The National Association of Wheat Growers and U.S. Wheat Associates put out a joint release, reminding farmers that this finding by FDA is not an approval for this or any other transgenic wheat to be planted for commercial sale in the U.S., but this is one more step toward that goal.

Currently, according to Bioceres, HB4 Wheat is awaiting approval from USDA.

Kansas State University Wheat Breeder Allan Fritz explains that the HB4 trait is targeted for drought tolerance, offering farmers a chance for increased yield under drought conditions. It’s not meant for irrigated fields, but rather those conditions where farmers may have to deal year after year with greatly reduced available water.

“A year like this, drought is on people’s minds,” Fritz says. “And it’s not uncommon to have drought in Kansas. So having this tool in the toolbox would be a really valuable thing.”

“We would manage it from a technical standpoint, like we would a disease resistance gene that we’ve moved from a wild relative,” Fritz explains. “It would be similar breeding procedures.”

Besides helping wheat farmers, this HB4 trait — and any other future biotech traits for wheat — can help wheat compete for acres in the state against crops that do offer farmers other advantages. And that’s good for the wheat industry, Fritz says.

He does caution that there are a lot of questions to be answered before the HB4 trait is allowed to be used in U.S. wheat breeding programs, but the news is encouraging.

Bioceres Crop Solutions Corp. is an Argentine company working on biotech solutions for various crops that help agriculture transition to carbon neutrality. According to the company, the HB4 drought-tolerance trait has been shown to increase wheat yields by an average of 20% in water-limited conditions. That’s attractive for managing limited water resources, especially in western Kansas.

But, that’s just part of the story. The HB4 trait can be used in soybeans as well as wheat. By planting HB4 wheat and then HB4 soybeans in a double-crop, no-till rotation, the company says it can fix an estimated 1,650 kilograms (3,638 pounds) of carbon into the soil, per hectare (2.47 acres) per year — or about 668 kg (1,473 pounds) of carbon per acre per year. And that’s a potential bonus for farmers looking to join a carbon program.

Fritz reminds growers that the HB4 trait is just one tool in the toolbox for wheat breeders. Wheat breeding is about incremental improvements over time, he says. The advancements made in wheat breeding over the last 20 to 30 years have resulted in current commercial varieties with improved genetics that have performed well for farmers in many production scenarios.

“I would say our yields [this year] are significantly better than they had any right to be, given the kind of conditions that we had for such a long time,” he says. That’s proof of the progress public and private wheat breeders are already making in their programs.

NAWG and U.S. Wheat emphasize that, to date, the HB4 trait has only been approved for commercial production within a closed system in Argentina only.

However, regulators around the globe are coming aboard:

“With global demand for wheat increasing every year, the need to produce more wheat in sustainable ways is clear,” according to the release from NAWG and U.S. Wheat. “Drought had already reduced world wheat supplies and pushed prices higher before the invasion of Ukraine cut off supplies from the world’s fifth-largest wheat-exporting nation. A trait such as drought tolerance in wheat could help wheat growers in increasingly arid regions be more productive and ease food security concerns.”

In the early 2000s the U.S. wheat industry started conversations about the potential biotech wheat, recognizing the benefits and value that can be created through the prudent application of modern biotechnology. In 2008, U.S. Wheat and NAWG signed onto the jointly approved Wheat Industry Principles for BIotechnology Commercialization.

which lay out specific steps expected from plant breeding companies if they wish to commercialize transgenic wheat in the United States.

In addition, USW and NAWG support the ability of domestic and overseas customers to make purchases based on their preferences for specific wheat traits, classes, qualities and characteristics.

U.S. Wheat, the National Association of Wheat Growers, and Bioceres Crop Solutions Corp. all contributed to this article.