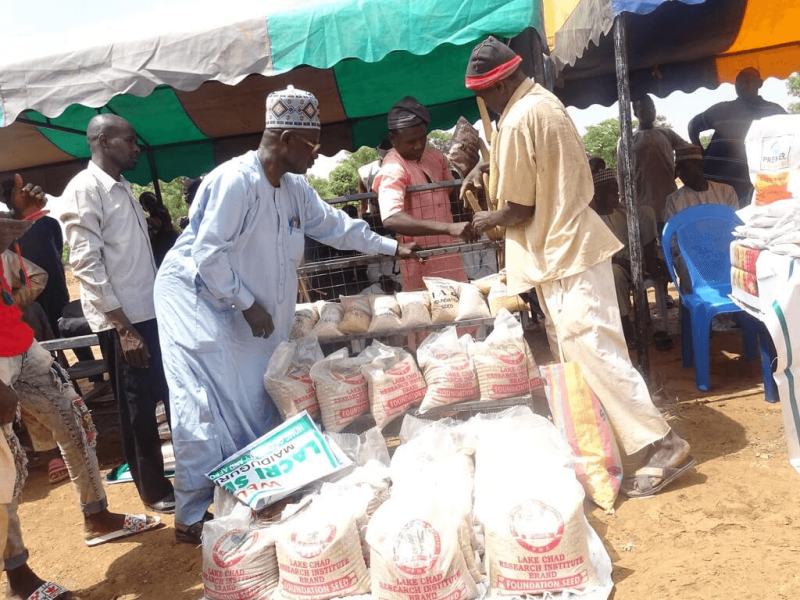 Nigerian leaders are urging other West African nations to adopt genetically modified cowpea given their own success with the crop.

They’re also sharing tips on how to avoid the mistakes they made in rolling out GM crops, including cowpea engineered to include a gene from bacillus thuringiensis (Bt), which provides inherent protection against the destructive pod borer pest.

Prof. Celestine Aguoru, president of Nigeria’s National Biotechnology and Biosafety Consortium (NBBC), also stressed the need for public enlightenment — starting with the policymakers, rural populace and farmers — to enhance the acceptability of the new product.

People are afraid of change and skeptical of new things, hence the need for public education to remove the prevailing misinformation based on ignorance, he said.

Aguoru pointed out that Nigeria didn’t start its public education in a timely manner, which created a vacuum that technology opponents used to sow the seeds of doubt in the hearts of many. He said Ghana does not have to go through the same process but should learn from Nigeria to educate and sensitize its citizens to wade off unnecessary attacks.

“Nigeria had some issues with its new technology because most people know cowpea as ‘beans,’” he explained. “So, when you call it cowpea, they find it difficult to relate with it and anti-technologists took advantage of that to come up with conspiracy theories. That is why public education is necessary, to build people’s confidence to trust, accept and adopt this new variety. And eventually, everyone will benefit from it.”

“The decision to adopt Bt cowpea is a sovereign one,” said Dr. Rufus Ebegba, director-general of the National Biosafety Management Agency (NBMA). “However, if they want to take advantage of safe biotechnology products since Nigeria has approved it, our advice is that they tow the path of Nigeria so that, together, as members of the West African sub-region we will effectively regulate the product.”

His comments were directed primarily toward officials in Ghana, who are considering whether to allow farmers to grow the pod borer-resistant (PBR) varieties developed by Ghanaian scientists.

“Whether Ghana approves it or not, it might likely enter Ghanaian territory,” he said of PBR cowpea. “We have a legal system [in] which if what we have approved is the same product in Ghana it will make it easier to regulate so that both countries can work together.”

The Nigerian biotechnology regulator urged politicians to allow science and technology to thrive as the engine of growth and said they should have no fears about standing behind proven scientific discoveries.

Similarly, the NBMA boss advised the Ghana National Biosafety Authority (GNBA) to ensure it has the requisite knowledge to regulate the product. He added that, if the agency is armed with the right skills, it will effectively regulate the product when commercialized.

“Also, they should not allow themselves to be intimidated when it comes to doing their job (in terms of approving the product when it has passed all the necessary checks) to make it accessible to farmers,” he said.

Harping on the urgency of the action to make sure farmers who are the direct beneficiaries of the product can access improved seed, Dr. Onyekachi Nwankwo, the West Africa representative for the Africa Agricultural Technology Foundation (AATF), asserted that commercialization is very important.

Ghana needs to deregulate and approve the product immediately to start the commercialization process, given that farmers in that country are already yearning for the product, he said.

Dr. Rose Gidado, country coordinator of the Open Forum on Agricultural Biotechnology (OFAB), Nigeria chapter, urged scientists to break down the jargon to help Ghanaians understand the technology used in developing the product. She cited adoption, uptake, usage and acceptance as being key.

Because the improved cowpea is resistant to Maruca Vitrata, an insect pest responsible for up to 80 percent crop losses, it will improve farmers’ yield, she said. Additionally, it will reduce the use of pesticide spray, which is expensive and harmful to human and environmental health, and will invariably enhance food security and economic development.

“They have spent so many years researching and ending up with a very good product,” Gidado explained. “If the product is not put to use, then they haven’t done anything because their research aims to impact society, especially the poor, in the enhancement of food security. You cannot enhance food security if people — not just the farmers, but everyone in the society — are not using it.

“So, it is important for scientists to make Ghanaians understand that the PBR cowpea developed by local scientists in Ghana is safe and has no negative health implications,” she continued. “They have to assure them that all the safety measures and valves were put in place and evaluations are carried out. This is the [only way] to instill confidence” in the product.

Tackling misinformation is important in modern biotechnology, where facts are frequently misrepresented and distorted, Gidado said.

“They also have to engage the critics, listen to them — we have to have empathy and put ourselves in their shoes — and make them understand,” she said. “Everyone in society has a right to the right information. This is so people take the right decision and have the liberty to choose what they do with the available, correct information they have.”

She pointed out that some people misconstrue what scientists do. Some people believe the GM seeds are imported, which is not true. Instead, African scientists “have indigenized the technology and that’s the best way to grow.”

Ebegba concurred. The notion that this technology is coming from outside Ghana must be forgotten because local citizens have the capacity and capability to develop technologies to tackle that country’s food security challenges, he said.

Nkechi Isaac is a deputy editor with Leadership Newspaper, a national publication headquartered in Abuja, Nigeria. She frequently covers biotechnology and biosafety issues. Follow her on Twitter @enkaybc