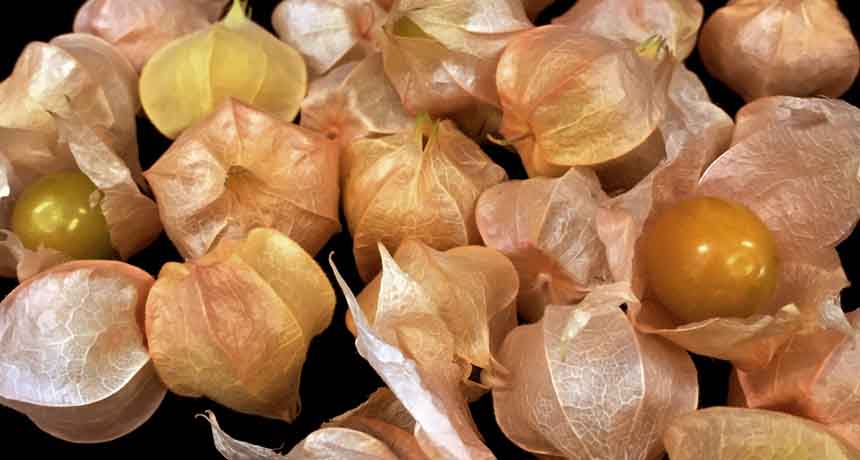 Gene editing can speed up plant domestication, taming wild vines, bushes and grasses and turning them into new crops.

Ground cherries and their close relatives Cape gooseberries or golden berries (Physalis peruviana L.) are grown in many parts of the world, but have traits — such as dropping their fruit on the ground — that make them unattractive for large-scale agriculture.

“This is a really unruly plant with great potential,” says Harry Klee, a plant geneticist at the University of Florida in Gainesville. The new work serves as a how-to manual for others interested in rapidly domesticating new crops, he says.

Lippman, plant biologist Joyce Van Eck of Cornell University and their colleagues deciphered the ground cherry’s genetic instruction book, or genome, and looked for genes that give domestic tomatoes some of their characteristics. Cutting one gene called SELF-PRUNING 5G with the gene editor CRISPR/Cas9 created a mutation that caused the plants to stop making shoots and leaves and to instead produce more flowers and fruit. The altered plants yielded 50 percent more fruit on each shoot than unaltered ground cherries. Snipping a second gene, CLV1, caused the fruit to grow 24 percent heavier.

Breeders might make mutations in the same genes by irradiating seeds or treating them with chemicals, but it would take decades, says Lippman, who is also a Howard Hughes Medical Institute investigator. Gene editing accelerated the process, compressing the time to just a couple of years. The berries aren’t yet fully domesticated — they still drop fruit on the ground — but the researchers plan to make other modifications.

Other researchers are using CRISPR/Cas9 to replay domestication by altering tomatoes’ wild ancestor (Solanum pimpinellifolium). A group from the Chinese Academy of Sciences in Beijing cut four genes in ancestral tomato strains that are resistant to bacterial spot disease, including two salt-tolerant strains, to create disease-resistant and salt-tolerant plants resembling domestic tomatoes, those researchers report October 1 in Nature Biotechnology.

Another independent tomato domestication replay is described October 1 in Nature Biotechnology. In that study, researchers sliced six genes at once to create S. pimpinellifolium tomatoes that produce five times as much of the antioxidant chemical lycopene as commercial tomatoes.

Researchers might not be able to use the same tricks for plants without well-studied domestic relatives, says Martin Mascher, a computational geneticist at the Leibniz Institute for Plant Genetics and Crop Plant Research in Gatersleben, Germany. “CRISPR is a very precise tool, but it also requires precise knowledge,” he says.

One difficulty is getting CRISPR/Cas9 into plants, which have tough cell walls. That may be more difficult for trees and grain crops than it is for tomato relatives, he says.

But technical difficulties probably won’t hold the technology back as much as legal and financial ones, says François Belzile, a crop genomicist at Laval University in Quebec City.

Academics and small companies may not have the money to license CRISPR/Cas9 in order to develop a commercial product. And government regulation may stand in the way, too. The European High Court ruled earlier this year that gene-edited crops must be regulated as genetically modified crops, even though gene editing makes the same kinds of mutations as radiation and chemicals. Only big companies may be able to afford to win regulatory approval for crops developed with CRISPR, Belzile says. “And if that’s the case, then much of the promise of genome editing will be limited.”