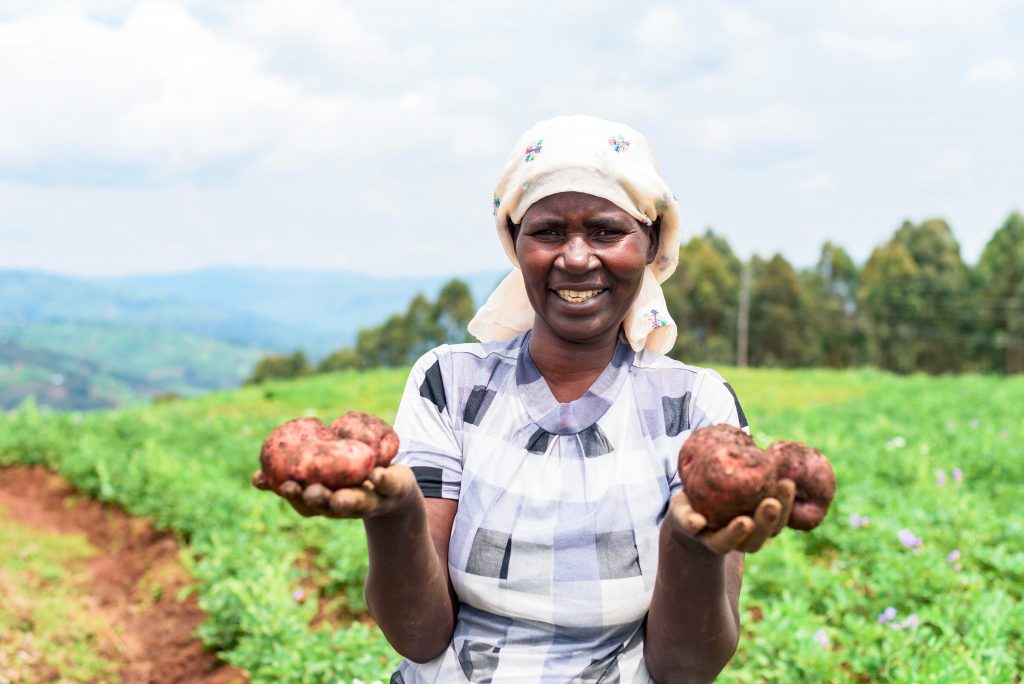 Farmer Bone-Konsira Tumwesigye holds some potatoes in her hands. To get a good harvest, she must spray her field with fungicides on a weekly basis, a labor intensive, time consuming and expensive undertaking. Credit: CIP

Successful innovation for agriculture will depend on thorough and careful understanding of the aspirations of beneficiaries and the challenges farmers face. It entails putting them at the center of these innovations.

In Kabale, approximately 410 kilometres (by road), south-west of Kampala —the capital of Uganda —  and bordering Rwanda to the east and south, we meet two farmers: Bone-Konsira Tumwesigwe and John Karugaba. These two are part of 300,000 smallholders who grow potatoes in Uganda for subsistence and income.  They have experienced firsthand the challenges that come with potato farming in this fertile region.  Loosing up to 60% of their potato crop due to the devastating late blight disease has been the most dreadful. This is the same potato disease that caused a famine in Ireland in the 1800s that killed two million people. In Uganda alone, the disease can cause annual losses between $60 and 100 million.

To guard against late blight, farmers like Tumwesigwe and Karugaba must spray their fields at least once a week with fungicides, digging deeper into their savings to protect their source of livelihood.

“Each application (of fungicides) costs me about UGX 50,000 (USD 13.66) per acre”, said Karugaba. For Bone-Konsira, for every 10 sacks of potato she grows, she spends about UGX 1.5M (USD 408) on chemicals. Furthermore, their inability to afford good quality protective gear when using fungicides put’s their health at risk.

However, all is not lost.

Innovations that put us ahead

As part of its work to research solutions addressing hunger and poverty, the International Potato Center (CIP), a CGIAR research center, has been collaborating with the Kachwekano Zonal Agricultural Research and Development Institute (KaZARDI) of Uganda’s National Agricultural Research Organization (NARO) to develop and test a new type of blight-resistant potato, which may not need any fungicides. This potato— named 3R potato— could help protect farming families such as Tumwesigwe’s in Uganda and possibly elsewhere in Africa from losing their crops to blight—and without requiring expensive and potentially hazardous fungicides to be effective.

Tumwesigwe is particularly excited about this 3R potato which is an improved version of the popular Victoria variety, having followed developments through the field trials implemented at KaZARDI, a few kilometers from her home.  Having gained employment as a casual laborer at the confined trial site “I have seen first-hand, for the last 10 years the difference in the usual Victoria and this improved 3R Victoria potato”, said Tumwesigwe.

CIP and NARO have conducted over a dozen field trials of the 3R potato that contains genetic traits that protect it from late blight. The potato contains genes acquired from potato relatives that are naturally resistant to blight. The method used to develop this new potato—known as biotechnology—requires that it undergo extensive testing before farmers in Uganda can cultivate it. The trials have shown in all cases that biotech potato can be grown in the presence of late blight without fungicide while late blight disease killed all other conventional varieties.

The resistance to the devastating late blight disease got Tumwesigwe all excited with the hope to be able to access the variety soon.  However, she (just like other farmers) suffering from the effects of potato late blight disease, must wait it out while the variety completes its safety evaluation—a process that seems to be hampered by opponents of the biotech potato, who seem to be unaware of the benefits as well as the rigorous safety tests the potato must undergo before final release. Such are the people Tumwesigwe and Karugaba would like to address as they join researchers in advocating for its release.

“My interest in 3R Victoria is my health condition in the long term and saving money due to labor and purchase of chemicals and also time”, said Karugaba who also grows and sells seed potato. When he finally has access to the new variety, he hopes to purchase more land for the expansion of his seed potato business from the savings he anticipates to make.  He further urges all to trust the scientists working on the potato as they have addressed all safety concerns.

Because there are three genes from potato relatives, biotechnology was found to be the most efficient way to transfer them into existing varieties grown by farmers to achieve resistance to potato blight. Breeders could have used traditional techniques to breed or ‘cross’ the potato relative with a domestic potato to develop a new, disease-resistant variety as they did for one gene after 46 years of efforts. But it is nearly impossible to have three of these genes together in one variety using conventional breeding methods.

“The time needed to develop a blight-resistant potato by breeding is simply far too long if the goal is to protect farmers and consumers in Uganda and elsewhere in Africa who are facing the threat of blight right now and don’t have decades to wait for a solution. Their harvests are being ruined and the threat is spreading rapidly. And every year that passes without a solution to late blight is another year of stagnating incomes and increased risk of hunger and malnutrition”, noted Research Scientist Abel Arinaitwe, based at NARO who has been working on the project and engaging the services of  Tumwesigye.

Both Tumwesigye and Karugaba, speaking on behalf of potato farmers in their region, urge policy makers in Uganda to avail the innovation to them as it could change their fortunes. Quite an urgent cry at a time when the need for cutting edge innovations in agriculture is more crucial than ever. Rising populations will require 60% more food by 2050.

In the face of challenges such as climate change and pandemics like COVID-19, the clarion call is to produce more food with fewer inputs in Africa.

This blog is part of the GFAR Partners in Action series, celebrating the achievements of our diverse network of partners who are working together to shape a new, sustainable future for agriculture and food. Each month we will be showcasing stories related to a key theme in agri-food research and innovation. The theme for July is ‘Farmers at the center of innovation’.

Join the conversation in the comments below or share this article on social media using #GFARinAction. 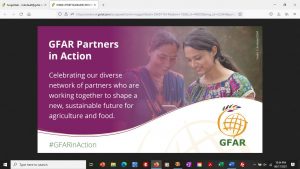