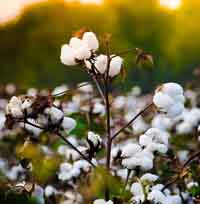 Kenya’s President Uhuru Kenyatta has instructed the Ministries of Health, Agriculture and Trade, Industry and Cooperatives to explore the possibility of farming Bt cotton to revitalize the country’s cotton sub-sector. In his Heroes’ Day address to the nation, President Kenyatta directed the three ministries to work together and come up with a quick mechanism to revive the production of cotton, including the possibility of introducing biotech cotton.

The President’s directive marks a big step towards commercialization of the crop which is now undergoing National Performance Trials (NPTs). The pronunciation adds a fresh impetus to the Big Four’ Action Plan, aimed at accelerating the country’s economic growth. Under the Plan, the government banks on Bt cotton adoption to revive the textile and apparel industry and increase the contribution of the manufacturing sector to the country’s GDP from the current 9.2 percent to 20 percent by 2022.

As part of the revitalization process, the government aims at creating 680,000 direct jobs through cotton farming, 210 jobs at ginning level, 6,000 at integrated mills and 25,000 at garments manufacturing. The revival will further create an import substitution of Ksh1.2 billion ($11.87 million) and enhance self-sufficiency of lint for exports that will earn Kenya Sh8.75 billion ($86 million) in foreign exchange.

Only 30,000 farmers are currently cultivating cotton while the industry has the potential to support over 200,000 farmers. According to the country’ Fiber Crops Directorate, domestic market demand for lint is 140,000 bales against a production of 21,000 bales. “Cotton farming was once a major source of income and livelihood for many people in this region,” lamented the President.

Adoption of Bt cotton is expected to boost productivity from the current estimate of 572 kg/ha to 2,500 kg/ha, and lower the cost of production by 40%. The presidential nod for genetically modified (GM) cotton cultivation comes in the wake of a study tour of India’s cotton sub-sector by Kenyan policymakers. India’s biotech cotton success story convinced the policymakers that the improved crop will make a big contribution towards resolving cotton farming woes in the country.

For more information, contact Dr. Margaret Karembu at mkarembu@isaaa.org.
Source: News from Around the World